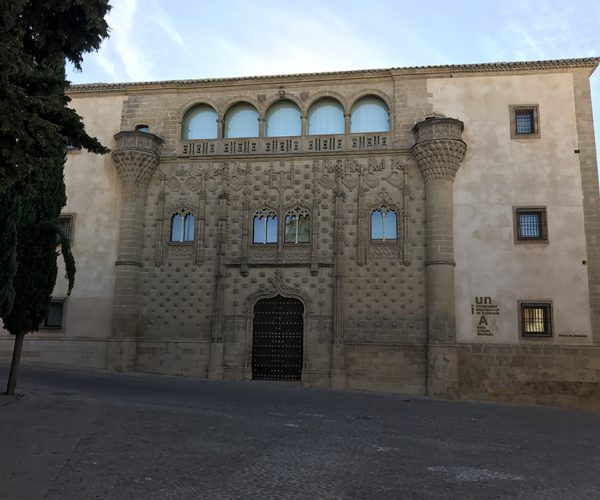 The Jabalquinto Palace was built in 1516 in gothic-Isabelline style. It is in Baeza- Andalucía, a World Heritage City by UNESCO. The building suffered many different renovations and was later abandoned until the International University of Andalucía, its present owner, decided to have it renovated in 1999. They announced an international tender which our studio won. The construction ended in 2003. In 2006, our office received the National Award for Restoration on Human Heritage Cities from the Ministry of Culture of Spain.
The Jabalquinto Palace conserves three highly valuable architectural elements. The first one is its façade that reflects the Isabellin style and where its original design was totally respected. The second element is the Renaissance style courtyard and the third one is the magnificent baroque style staircase with a monumental character.
The renovation aimed at two objectives: to give a solution to the pathological state of certain constructive elements and to adapt the buildings to the University’s needs. The lay out that the University demanded was to include classrooms, offices, assembly hall and chancellor’s offices.
Technically, the construction was planned in four phases. First the demolition of the roof and floors, second when the building was secure, we started with the most difficult and dangerous work: to make the galleries for ventilation, to reinforce the foundations and repair the basement. The third phase was to clean the walls to preserve the different paintings and Italian type stucco . Finally, we restored the coffered ceilings and made a new one with laminated acoustic wood boards. The walls were covered with stucco of lime made as the classic ancient techniques.
This whole process was made with great care to show the different techniques and paying special attention to the historical times.